Hands down, the ULTIMATE bar trick. This dude has some seriously steady hands. It's gotta be all in the steering... right? 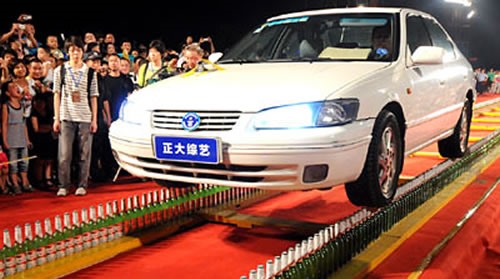 "A Chinese man has made a stunning Guinness world record of driving across two rows of bottled beers for over 60 metres in Wenzhou.

Li Guiwen, an army driver from Beijing, steered along 1,798 bottles for 60.19m in a time of eight minutes and 28 seconds in eastern China's Zhejiang province.

He had previously attempted the same record in 2009, but due to rain, the right tyre of his vehicle slipped off the bottle track.

Li, who thought of creating this record after a drinking bet with friends, added, 'Since the failure last year, I have been training constantly.'"

Want to master Microsoft Excel and take your work-from-home job prospects to the next level? Jump-start your career with our Premium A-to-Z Microsoft Excel Training Bundle from the new Gadget Hacks Shop and get lifetime access to more than 40 hours of Basic to Advanced instruction on functions, formula, tools, and more.

hrm, i cant find any videos of this.

This man has no life .! He must have really invested alot of time and energy into this. SMFH. SMFH.

All those people are not there to see the guy drive, they are there for the 1700+ free beers afterward. 10 beers per adult, 2 for children.

Only thing that makes sense.